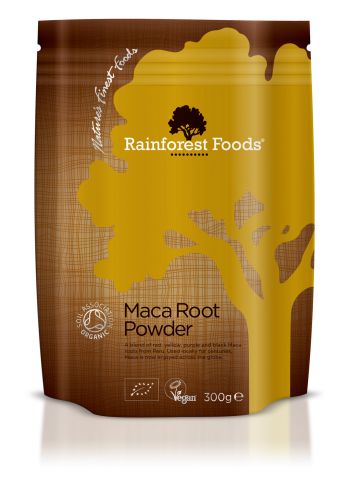 Be the first to review this product
£11.41
Out of stock
Rainforest Foods Organic 4 Root Maca Powder - 300g
Notify me when this product is in stock

A blend of red, yellow, purple and black Maca roots from Peru.

Maca is a plant known as Lepidium peruvianum Chacon, which grows in the Peruvian Andes over 4000m above sea level. These are harsh conditions, in which plants have to be good at taking up nutrients from the soil. Maca's root and hypocotyl the bulbous stem below the leafy growth have for centuries been part of the diet and culture of local people.

There are several variants of Maca, which express themselves in the colour of the root and hypocotyl. Maca can be cream, yellow, green, red, purple, grey or black. Fundamentally these have the same basic wide nutritional profile, but they exhibit small shifts in the proportions of their secondary phytonutrients. Scientific study has begun to confirm the established dietary opinion that different colours of Maca have slightly varying nutritional properties. Rainforest Foods Maca powder contains a blend of 4 phenotypes of Lepidium peruvianum Chacon a specific type of maca designed as an optimal general combination. These are red, yellow, purple and black roots.

Rainforest Foods Maca was the Platinum Award winner for Best Organic Superfood Powder, in the Janey Loves 2011 awards, part of Imperfectly Natural. "Our tester has been taking this superfood as a yummy drink. It is certified organic by the Soil Association. Maca helps strength, stamina and libido," commented Imperfectly Natural.

Rainforest Foods raw Maca is cultivated in Peru, at high altitude (over 4000m). The growing season is eight months long, which gives time for the nutritional profile to develop fully. A further three months is given to a natural, open-air drying process. The dried roots are cleaned and broken into small pieces, which are then milled to powder.

Suggested Use: Take 1 heaped teaspoon of Maca root powder mixed with water, juice or in a smoothie, once or twice a day. Maca root powder can also be sprinkled on foods such as muesli, cereal or porridge.