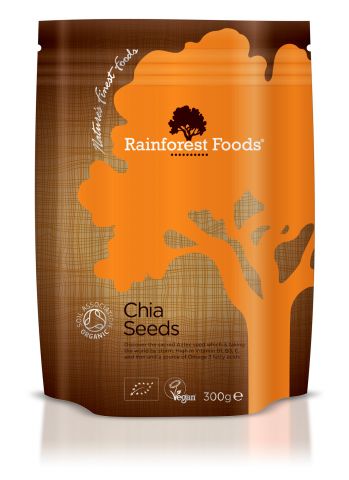 Be the first to review this product
£6.00
Out of stock
Rainforest Foods Organic Chia Seeds 300g
Notify me when this product is in stock

Discover the sacred Aztec seed that is taking the world by storm.

Chia is a South American herb known as Salvia hispanica. Its seed has been regarded as a highly valuable food for many centuries. It is believed to have been one of the staples of the Aztec diet, and today remains a core part of local cuisine in its native growing areas of southern Mexico and Guatemala. Chia is gaining popularity across the world. A key dietary component for the Tarahumara Indians of Mexico, a people known for their prowess in long-distance running, Chia is now well-regarded by the global marathon and ultramarathon community.

The signature offering of Chia seed is significant quantities of Omega-3 and Omega-6 fatty acids, which compose nearly 20% of the Chia seed's mass. The ratio of Omega 3 fatty acids to Omega 6 fatty acids is 3.5 to 1. There are many modern foods that contain Omega oils, but many of these provide them in a ratio skewed in favour of Omega-6. Chia seed also provides abundant carbohydrate. Its vitamin and mineral content is noteworthy, especially in Vitamins B, B3 and E, plus Iron.

Chia seed has a light, nutty taste, and it is easy to add to many dishes. Its outer skin absorbs liquid to become gelatinous, which allows it to be used in drinks and smoothies. This is a versatile food, and a useful dietary support.

Rainforest Foods raw Chia is grown organically on farms in South America. The growing season is five months long, during which time the full nutritional value of the seeds can develop. Chia is harvested by machine, and the seeds cleaned carefully to remove any stalk material. They are then packed for transport.

Suggested Use: Chia seed is classified as a novel food in the EU and certified as a bread ingredient to a maximum of 5%.