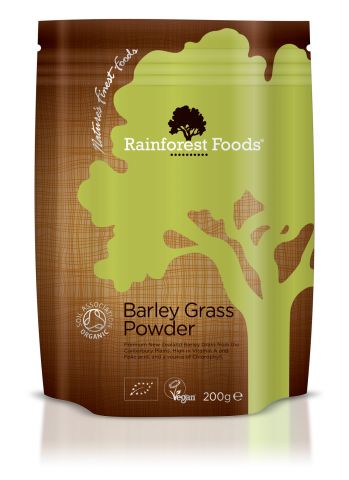 Be the first to review this product
£11.73
Out of stock
Rainforest Foods Organic NZ Barley Grass Powder 200g
Notify me when this product is in stock

Barley has been used by humans for thousands of years, mainly as a cereal crop but also as the base of fermented products such as beer. The ancient Egyptians, Romans and Vikings all used Barley, and Columbus carried it to the Americas in 1493. During the early Twentieth Century American agricultural research into beneficial foodstuffs discovered that the grass, or leafy growth of the young Barley plant, serves as a high-performance food for both livestock and humans.

Barley, or Hordeum, is a grass with many varieties, both wild and domesticated. However, Barley grass as we know it comes from Hordeum vulgare, the Barley cultivated most commonly in agriculture. Known for the wide range of its nutrition, Barley grass is a good source of Vitamin A, Folic acid and the magnesium-rich green pigment Chlorophyll.

Rainforest Foods Barley grass is sourced from an organic farm in Canterbury, New Zealand. The entire production process is organically certified, and is designed to allow a high proportion of the plant's original nutritional value to be retained. The Barley grass is harvested while the plant is still young, below 30 cm tall. Within 1-6 hours of harvest the Barley grass is transported to an organically certified dehydrating company, where the moisture content is reduced to approximately 4% by air dryers. The drying process takes between 20 and 25 minutes. Samples are taken hourly for daily quality assurance testing. Once dried, the powder is milled, to particles first of approximately 150 200 microns, then 50 microns.

Suggested Use: Take half a teaspoon of Wheatgrass powder mixed with water, juice or in a smoothie, once or twice a day for the first week. Increase this to a full teaspoon after 1 week.