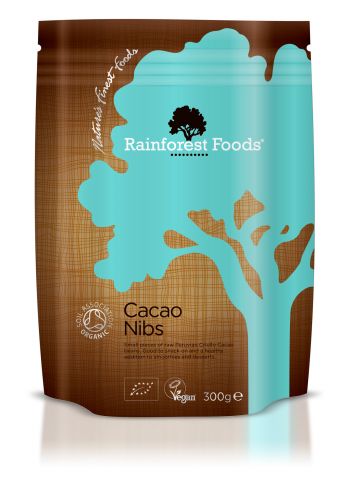 Be the first to review this product
£3.50
Out of stock
Rainforest Foods Organic Peruvian Cacao Nibs 300g
Notify me when this product is in stock

Cacao, or Cocoa, is the fruit of a small, evergreen tree called Theobroma cacao. It grows in tropical climates, particularly in South America. Cacao is best-known as the base material in chocolate production, but has in recent years become known as a highly nutritious food in its own right.

Cacao is a source of antioxidant flavanoids the cacao flavanoid group is known collectively as flavanols. The antioxidant provision of foods is measured on a scale referred to as ORAC (oxygen radical absorbance capacity). Cacao has an exceptionally high ORAC score. It is also significantly rich in magnesium and fats such as Oleic acid, the fat found in olive oil.

A well-known Harvard Medical School study investigated the effects of Cacao on the Kuma Indians of Panama, comparing a group given to drinking large quantities of home-prepared Cacao with another exhibiting more modern dietary habits. The results were startling: put simply, the Cacao-consuming group had much lower rates of stroke, cardiovascular disease and cancer than the other.

Rainforest Foods Cacao is produced by organic growers in Peru. It is harvested by hand as pods. These are broken apart and the pulp surrounding the beans allowed to ferment. It eventually runs away as liquid. The fermentation not only removes the pulp but also reduces the beans' bitterness. The beans are then cleaned, dried, and broken into small pieces (nibs).

Suggested Use: Cacao nibs are a versatile ingredient that can be added to many foods or alternatively eaten as a snack. Consume two tablespoons per day.