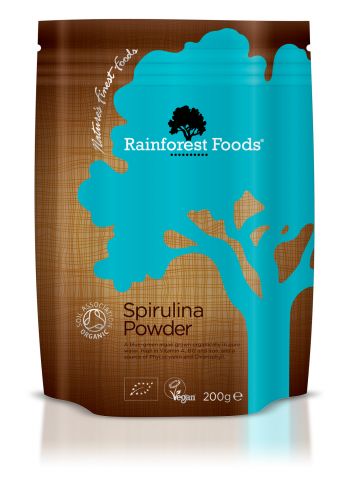 Be the first to review this product
£7.99
Out of stock
Rainforest Foods Organic Spirulina Powder - 200g
Notify me when this product is in stock

Spirulina is the name given to Arthrospira platensis and Arthrospira maxima, strains of spiral-shaped blue-green algae that flourish in subtropical and tropical waters. It has been consumed by humans for centuries. The South-American Aztec people harvested Spirulina as a staple food, and today it is regarded as a central component in some Asian diets. While it can grow in natural conditions, most Spirulina today is produced commercially.

Although Spirulina contains a broad spectrum of nutrients, it is notable for its provision of Vitamin A, Vitamin B12, Iron, the pigment-protein Phycocyanin and the magnesium-rich green pigment Chlorophyll. In powder form, Spirulina can be taken as a supplement in water, or incorporated into foods and smoothies.

Rainforest Foods Spirulina is produced organically on an island in the South China Sea using photosynthesis, the natural process by which plants absorb energy from sunlight. Batches of algae grow, multiplying naturally and rapidly in pools of pure water. They are harvested when they reach the required density. Once harvested, the Spirulina is dried and milled to powder.

Suggested Use: Take half a teaspoon of Spirulina powder mixed with water, juice or in a smoothie, once or twice a day for the first week. Increase this to a full teaspoon after 1 week.